After about 6 months of formulating my idea to bring a nice new hotel to Madagascar, I am back in Ranomafana National Park. I once again traveled from New York to Centre ValBio (CVB) with Stony Brook’s study abroad program; however, on this trip I will not be taking their classes. I am here on my own to make decisions about where I will go each day and to move forward with my business. I am using CVB’s living and dining facilities, though sometimes I opt for a better meal that is not being prepared for 30+ people by going up the road to the restaurant that is operated by my Malagasy friend Khen and his family.

There are 2 ways (that I know of) to fly from New York to Madagascar. No flights come in directly so travelers must stop in either France or South Africa to transfer planes. The route that I took began with a flight from JFK to Johannesburg, South Africa. This was followed by a much shorter flight into Madagascar’s capital city of Antananarivo (often called “Tana” for short). After a 1-night stay in Tana, the study abroad group took a bus south to reach Ranomafana. Luckily for me there was not enough room on the bus for all of the luggage plus a traveling group that totaled about 20 people. So instead I rode in a Jeep with Dr. Pat Wright and 2 researchers. Pat was in a rush to reach CVB to take care of some emails, so we didn’t wait up for the bus and arrived at CVB quite some time before the rest of the group.

I have taken a few walks in the area to take a look at land that is potentially available for construction of a hotel. I also went with the study abroad group on a walk inside the national park where lemurs live, but somehow we did not find any. It’s winter here in the southern hemisphere, and though it’s never cold enough to snow in Madagascar it’s certainly chillier than when I was here from September-November.

I am having a good and productive time here so far. This trip will only last a few weeks so I will be home before the end of June. I will put some pictures below of some things I’ve gotten a chance to see so far. 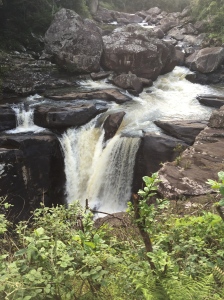 6 thoughts on “I am in the Rainforest!”